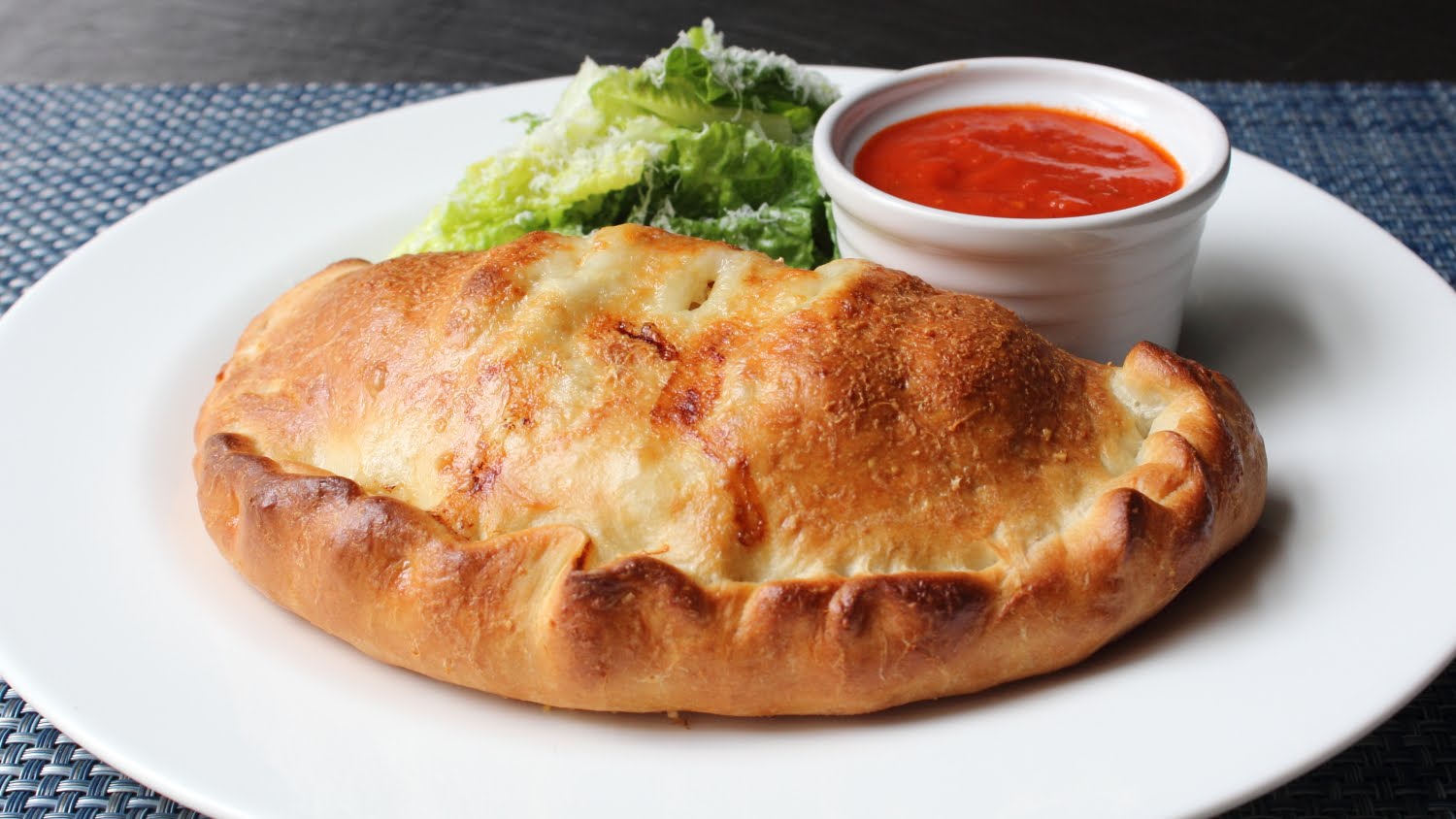 1. Prepare the bread dough and sauce as noted. 2. Form the calzone by dividing the dough into four equal pieces. Stretch or roll the dough into a circle approximately 10-inches in diameter. 3. Spread a very light layer of Marinara Sauce on one-half of each dough circle leaving a 3/4 inch perimeter in the clear. 4. Layer 1/4 of the cheese onto half of the dough circle maintaining the 3/4 inch clearance. 5. Moisten the edge of each dough circle with the egg wash using a brush. 6. Fold the dough circles in half, and press the edges together. Bring the bottom dough edge over the top pinching and folding the dough over to form a sealed edge. 7. Brush the top of each calzone with the egg wash. 8. Sprinkle 1/4 of the grated cheese on top of each calzone. 9. Cut a few slits in the top of the calzone for venting during baking with a knife or scissors. 10. Bake in a pre-heated 400 degrees oven for 20-25 minutes on a lined baking sheet or pizza stone until the calzone are golden brown.

1. Assemble all the ingredients in a broad skillet or saucepan. 2. Simmer the sauce for 15-20 minutes over medium-low heat until reduced and a thick sauce results. Adjust seasonings to taste. 3. Allow to cool. Spread on the calzone as directed above. Serve the remainder at room temperature as a thick dipping sauce.

1. Stir the flour and salt together in medium mixing bowl until evenly distributed. 2. Place in another, larger mixing bowl, (or the bowl of a stand mixer outfitted with the paddle attachment), the yeast, sugar, and warm water. Allow the mixture to stand until the surface begins to bubble, about 5 minutes. 3. Pour 2 tablespoons of olive oil into the yeast-water mixture. 4. Add 1 cup of the flour and stir until well mixed. Continue to add flour a cup at a time stirring after each addition until a sticky dough ball is formed.

If mixing by hand: 5A. Turn the dough out onto a lightly floured surface. Knead for 5 minutes or until the dough forms an elastic character. Use a very light dusting of flour to keep the dough from sticking to the work surface; avoid adding too much flour.

If mixing with a stand mixer: 5B. Change the mixer attachment from paddle to dough hook after the last of the flour is added. An elastic dough ball will form. KNEAD the dough with the dough hook on a low speed for 3-4 minutes.

To use immediately: 6A. Place the dough into a lightly oiled bowl, cover and allow the dough to rise for 1 to 1 1/2 hours, or until doubled. 7A. Punch down the dough, divide into 4 smaller, equal pieces, and continue to assemble the calzone (as above) dusting with a small amount of flour to keep things workable, and not too sticky. However, avoid adding too much flour.

If using later: 6B. Place the dough into a lightly oiled bowl, cover and place in the refrigerator for 4 hours, or up to 3 days. Punch the dough down if needed during chilling to keep it contained in the bowl. 7B. Remove the chilled dough from the refrigerator and allow it to reach room temperature about 1 hour. Continue as above to form the calzone.

If freezing for later use: 6C. Oil lightly the inside of a freezer-grade plastic zipper bag. Divide dough into desired portions. Place in the oiled bag and place flat in the freezer. 7C. Remove the frozen dough from the freezer when ready to use and allow it to defrost and rise, about 1-2 hours depending on the amount of dough and the shape of the dough. Continue as above with the calzone assembly.


Buy the Products Featured in this Recipe:

You may also enjoy: