Asiago Cheese...Top quality sharp Italian table cheese used in many fine chef's recipes, also great when grated on top of salads, soups or pastas, and best eaten at room temp. Asiago cheese is known as "mountain cheese" because of the similarity to the Swiss Emmental and the French Comte cheeses. This nickname arises from the fact that all of these cheeses are produced from cows that graze on lush, mountain pastures. As a result, the cows produce thick and rich milk that serves as the backbone for making full-flavored cheeses. 1 lb wedge
Country: Italy
Region: Veneto (North East Italy)
Texture: Hard
Type of Milk: Cow
Age Time: At least 3 months

The Asiago is to die for!!
-Vicki, CA
Asiago, cheese is a nutty flavored
Asiago, pronounced ah-SYAH-goh, cheese is a nutty flavored cheese that hails from Europe. It is named for a region in Italy where it was first produced. This region is known as the Asiago High Plateau, which lies within the Italian Alps. As far back as the year 1000 AD, Asiago cheese was produced by farmers in this region for use locally. Now, it is manufactured commercially in northeast Italy, specifically in the provinces of Vincenza e Trento, Padua, and in Treviso. Aged 12 months
Nutrition Facts, Serving Size1oz(28gr);
Cal80,TotalFat9g(13%DV)Sat.Fat5g(27%),TransFat0g,Cholest.25mg(9%DV),Sodium330mg(14%DV)TotalCarb.2g(1%DV)DietaryFiber0g(0%DV)Sugars2g,Protein7g,VitaminA(10%DV),VitaminC(0%DV),Calcium(25%DV),Iron(0%DV)Percent Daily Values(DV)are based on a 2,000calorie diet.

Ingredients:Asiago Aged Cheese(Pasteurized Part-Skim MilkCheese,Cultures,Salt, Enzymes)
Any rich deep red wine will be a complement to this Asiago cheese such as Chianti, Rioja I would suggest even a Zinfindel
Best eaten at room temperature 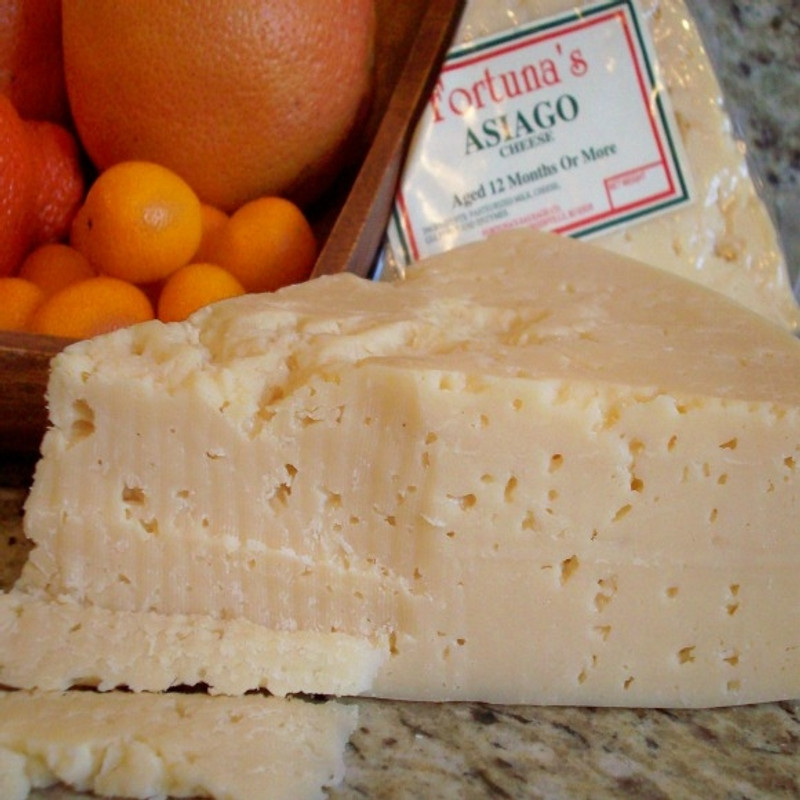