In Italy today farro is cultivated in a very small area around the foothills of both sides of the central Apennines, mainly in Tuscany, Umbria, Marche and Abruzzo. Farro thrives on stony or rocky well-drained hillsides about 1,000 feet above sea level. Farro is planted in October and harvested in June and survives in poor conditions, without the use of either fertilizers or pesticides.
The nutritional virtues of farro have long been revered in Italy. Farro is rich in fiber, magnesium and vitamins A, B, C and E. Protein content is also high and when combined with legumes, it forms a complete protein source. The starch it contains is very similar to that of rice and is very low in gluten, making it easily digestible even to some gluten-sensitive people

Gianluigi Peduzzi of Rustichella d’Abruzzo works alongside a group of local farmers and friends who own over 50 hectares in the area between Penne and the Gran Sasso, the highest peak of the Apennines. This area is partially protected by the Riserva Naturale Regionale Lago di Penne, a World Wildlife Fund reserve. The yield of over 100 tons of farro of the local variety known as farro vestino is then used for producing the flour for making Rustichella d’Abruzzo farro pasta as well as farro polenta. Prior to milling, the grains are sifted and sorted through an advanced selection process, separating the whole ones of the finest quality. Farro grains with their shiny reddish-brown color, pointy ends and very sharp texture, are processed for husking and pearling, removing the outer hard husk but leaving much of the bran intact.

This particular process makes cooking farro easier, ensuring a delightful chewy bite, which will hold even when cold. Unlike barley or spelt which easily become mushy, farro feels “al denteâ€? but backwards: harder on the outside, soft in the middle.

Soak the farro for 25 minutes. Drain and place in a pot covering with 2 quart of water. Bring to a boil. Reduce heat and simmer until farro is tender, 30 minutes.

Add the anchovy oil (colatura) and simmer for approximately 2 minutes. Transfer the soup in a serving bowl.

Serve with a drizzle of extra virgin olive oil and a pinch of dried oregano. 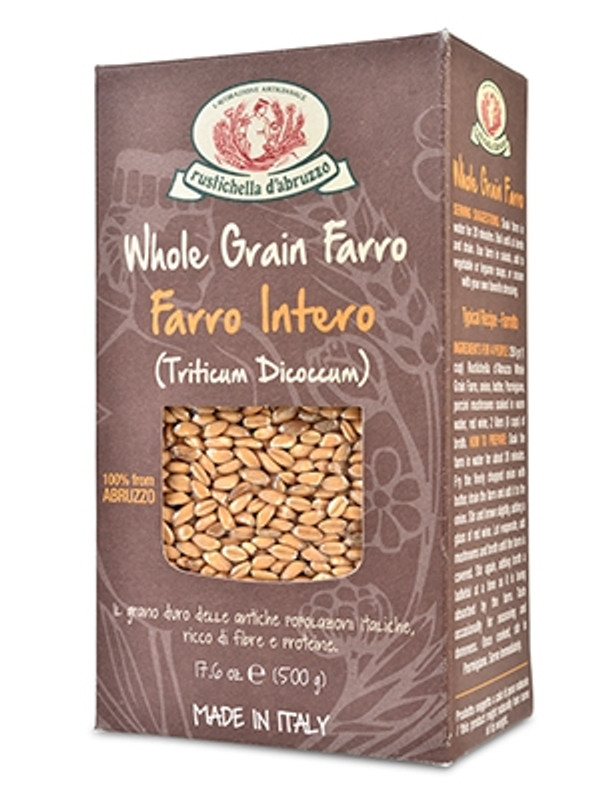