Montasio is a creamy, unpasteurized cow’s milk cheese originating from the Friuli, Venezia, Giulia, and Veneto provinces of Italy. Awarded (PDO) protected designation of origin in 1986, this cheese is sold fresh, middle and aged depending on the aging time of 60 days up to 1 year. It was originally a monastery cheese but today it is produced only in a specific region of Italy following age-old traditional methods.

History: Montasio gets its name from the mountain of the same name, a group of mountains between the Resia valley and the Canale del Ferro (the iron channel) in the Friuli highlands and belongs to the large category of alpine cheeses. Originating around the year 1000, these cheeses served the purpose of storing an easily perishable product such as milk for periods when production was low or non-existent.
It originated around 1200 when Benedictine monks from the Moggio Udinese Abbey refined the various production techniques of local cheesemakers. This production technology quickly spread through the valleys of the Julian and Carnic Alps before arriving up to the Friuli-Veneto plain. Its diffusion was also encouraged by its proximity to the "Canale del Ferro", an important line of communication and trade route dating back to the Roman times.
The first documents that explicitly mentioned "Montasio Cheese" were price lists from the city of San Daniele dating back to 1775. Its presence in trading documents from Italian marketplaces and its high trade value, considerably greater than that of other cheeses, are proof of this product’s high regard and value.
In the last century, Guglielmo Ghinetti described in one of his literary works the diffusion of this delicious cheese from the foothills of the mountains to the plains. A diffusion that increased by the construction of the first cooperative dairies in 1880, with the opening of the first by the master Eugenio Caneva di Collina.
In 1925 the first dairy school was founded in San Vito al Tagliamento. This school has trained generations of technicians who have spread the art of producing Montasio cheese throughout the surrounding provinces for many years.
It was awarded the Protected Designation of Origin status in 1996.
Montasio cheese
Ingredients: milk, salt, rennet, lysozime
RIND NOT EDIBLE
Serving size 1 oz = 28 gr
Calories 120
Calories from fat 93

Our favorite cheese with Sopressata! 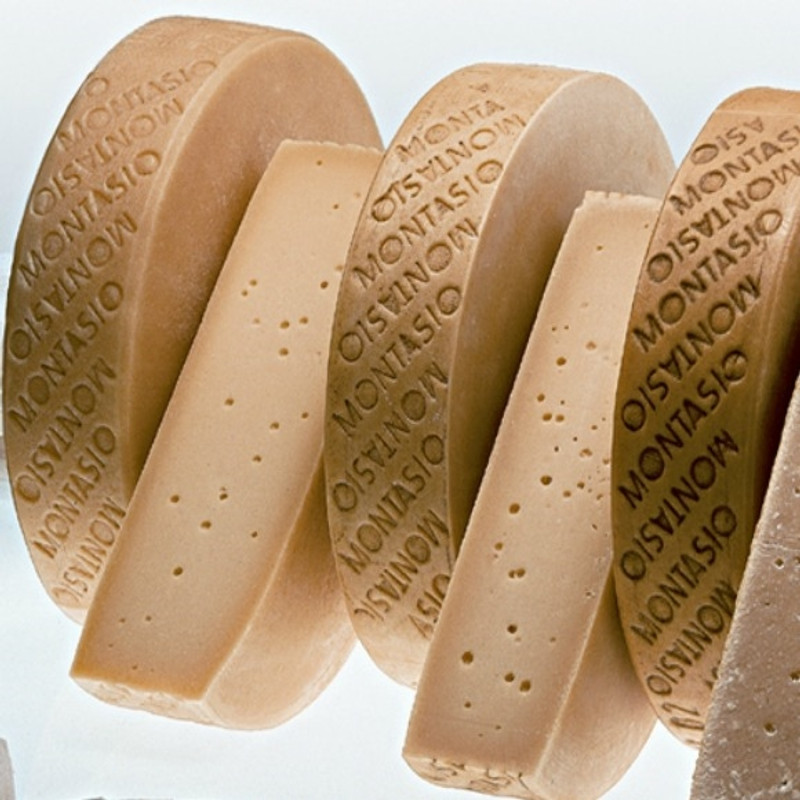